Oh boy. I am pretty excited for this week’s film. It’s not just because Horror/Thriller has turned into my favorite section of the cycle, but also because this film in particular looked so misguided and awful when it was released that it piqued my curiosity. That’s right! We are watching Ouija, the horror film based on the Hasbro spirit board game and one of the many horror films produced by Michael Bay over the years (he’s a noted enthusiast). Seems like an obvious choice to make an adaptation out of. It’s already about spirits and spooky ghosts so as long as it’s not totally unoriginal and terrible you should be fine. Easy, right? Wrong. Let’s go!

(Pretty good. A film in the 4.0’s staying strong and not rising as votes are added is a very very good sign. This is a case of what I will call Arrested Regression. The film should be regressing to the mean (the mean being that of films with around the same number of votes), but it isn’t. This is because it is in actuality as terrible as it initially seemed, so people seemingly are choosing to see the film despite knowing that it is terrible.)

RogerEbert.com – 3 stars –  Though I admit 16-year old me enjoyed the hell out of “Witchboard,” I didn’t think I’d have fun at “Ouija.” But I did, and assisting me were actors who gave their paper thin teenage types a little humor and character, and the film’s look. Shot by veteran camera operator, David Emmerichs, “Ouija” is a glossy hoot, showing more flair than a throwback to the 80’s horror movie should. As a lifelong horror movie viewer, I wasn’t scared by the film, but I dug the many ways it tried to goose me.

(Wowza! Three stars?! The review reads a little oddly, admitting he basically had a soft spot for the nostalgia the film evoked, but it is an interesting take I suppose. Not very many people agree to say the least.)

(Classic case where the less you show the better. Definitely parts that make me think it’ll be spooky scary. But then all the parts that they actually show the ghost or have someone flossing with their mouth stitched shut is just… not.)

Directors – Stiles White – (BMT: Ouija; Notes: Started in the industry in special effects before launching his career in screenwriting with his writing partner/wife Juliet Snowden.)

Stiles White (written by) – (Known For: Ouija: Origin of Evil; The Possession; Future BMT: Boogeyman; Knowing; BMT: Ouija; Notes: Apparently they are both attached to a remake of a German film called Du Hast Es Versprochen. Hoping it works out as well as this one did.)

Actors – Olivia Cooke – (Known For: The Limehouse Golem; Thoroughbreds; Me and Earl and the Dying Girl; The Signal; Katie Says Goodbye; Future BMT: The Quiet Ones; BMT: Ouija; Notes: Notably starring in the upcoming blockbuster release Ready Player One. Also in the new Amazon adaptation of Vanity Fair.)

Ana Coto – (BMT: Ouija; Notes: Really hasn’t done anything much since Ouija. Weirdly was just in a Logan Paul film released exclusively to Shudder called Can’t Take It Back which is coincidentally about putting something on the internet that you can’t take back… must not have been much of an acting stretch for Logan.)

Daren Kagasoff – (BMT: Ouija; Notes: Probably best known as one of the leads of the show The Secret Life of the American Teenager.)

(Obviously a colossal hit. They all are aren’t they? These small budget horror films. It is quite the phenomenon that they can effectively print money with these types of movies.)

#39 for the Horror – Supernatural genre 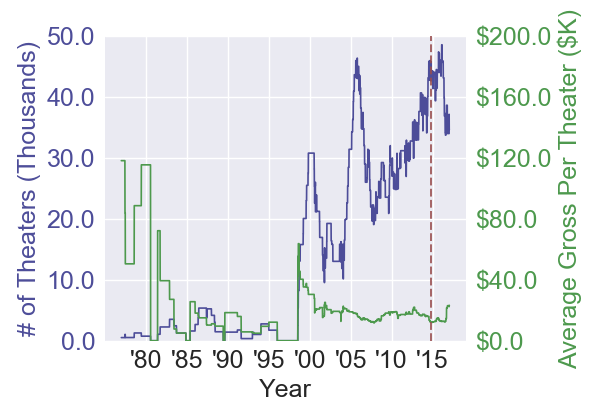 (Comes is right around The Devil Inside which isn’t a good look. Being a major money-maker for cheap horror means it has been growing in power throughout the 2000s, although it looks like maybe it is reaching its saturation point now. BMT: The Ring Series, The Devil Inside, Silent Hill, Thirteen Ghosts, Ghost Ship, The Fog, Bless the Child, The Forest, The Gallows, and  The Bye Bye Man)

#13 for the Toy Adaptation genre

(They are desperately trying to make this a thing. It looks like it has so far resisted moving beyond a few big budget franchises into faller fair. I feel like this is going to stay in the realm on animated films for the most part though, they’re all adapted from cartoons basically, so Transformers is really the odd-man out, no the other way around. BMT: The Transformer series, GI Joe: The Rise of Cobra, Bratz)

Rotten Tomatoes – 6% (5/79): Slowly, steadily, although no one seems to be moving it in that direction, the Ouija planchette points to NO.

(I wish someone at RT would tell them that no one wants a joke consensus. Just tell me the actual consensus of the critics, which is kinda the point of your website. This tells me nothing other than you spent too much time trying to think up something clever.) 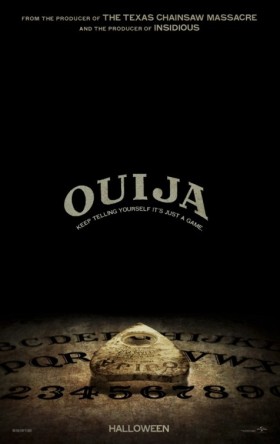 (I can dig this. Bold choice with some interesting font. Decidedly not scary though. Literally just a ouija board… why would I be scared of that?)

Tagline(s) – Keep telling yourself it’s just a game (B)

(I think this is good. Sometimes I have to say it a few times to make sure it isn’t nonsense. But this is short enough and gives a hint of the spooky scary concept. Wish it was a bit more clever.)

(We are killing this list. The Fog is by far the best one there. Although The Haunting is a pretty special viewing experience as well.)

Notes – The name can either be pronounced ‘wee-ja’ or ‘wee-gee’. Charles Kennard, founder of the company manufacturing the boards, claimed he learned the name “Ouija” from asking the board what it wanted to be called. (My god)

According to costume designer Mary Jane Fort, the cast and crew would often take breaks between shooting and use the Ouija board to jokingly predict the box office opening weekend numbers. (Z-E-R-O D-O-L-L-A-R-S … you know what this is stupid)

The film’s tagline, “Keep telling yourself it’s just a game,” was used for several years as the advertising slogan for the Ouija board game.

Though there are many other horror movies about Ouija boards – some with the same title – this film is not officially a remake of any of them and tells its own story revolving around the titular game. (Well yeah, it is a Hasbro production)

None of the actors portraying teenagers in the film were actually in their teens. The youngest actor was Olivia Cooke who was 21 at the time of filming.

When re-shoots went underway, in the process of drastically changing Doris Zander’s backstory, two new characters were created including her sister and mother. Lin Shaye, who plays Paulina Zander, was not in the original version of the film and was cast for the re-shot footage.

Some cast members are said to have experienced supernatural occurrences since the production of the film Ouija ended. It is said to be influenced by the making of the film.

In the original unaltered version of the film, Doris Zander had a much different look to her. In the original cut she took the appearance of a young girl with half of her face burnt while always carrying a doll. The re-shoots version is a rotting girl with sewn lips. (What? Changing the fundamental look, and thus backstory, of a character like that seems like an odd decision)

Erin Moriarty was cast in the film in an undisclosed role though she does not appear in the finished project. Her scenes were deleted when the film was reshot.

Another theory of where the name of the Ouija Board comes from is that it is the French and German for “Yes”: Oui-ja. The Board has Yes and No answers as well as the alphabet. (No that seems much more plausible)

Although Sarah Morris is supposed to be Laine’s younger sister in the film, in real-life the actress Ana Coto is actually 3 years older than Olivia Cooke, who plays Laine.

The first trailer for the film was released with the theatrical release of The Fault in our Stars (2014) containing alternate footage. A new trailer was released in the summer containing new scenes. In an interview, Olivia Cooke stated that about 50% of the film was reshot due to a negative reaction from test audiences, as a result Universal ordered a week’s worth of re-shoots during the summer 4 months before its theatrical release which drastically altered the original plot. The original cut contained a different assortment of footage including an alternate death scene for Debbie where she instead falls to her death instead of hanging herself (which is why the chandelier is swinging when Pete sees it because she struck it while falling) along with the most advertised scene where Sarah’s eyes roll back and she says “it’s not even real okay? It’s just a game”. Nona was also supposed to have a more prominent role in the film as it implied she becomes possessed in the promotional material. (Wow … this is going to be a mess)