Rich and Poe are hardboiled detectives ready to crack heads and flush crime down the drain (if it wasn’t for all the bureaucratic bullshit at the LAPD). Poe is only 10 days away from retirement and Rich doesn’t play by anyone’s rules so when they are called into the chief’s office and told that they must infiltrate a middle school in downtown LA they want to say no way. Unfortunately they know that despite being nearly 40-years-old they are the only ones hip to what the kids are up to and capable of doing the job. Tossing on backwards caps and some Reebok pumps they skateboard their way into school as a couple of dope tweens. They need to infiltrate the 7th grade Dungeons & Dragons club which is suspected to be a front for dealing a new synthetic drug on the market called DeezNuts. “D&D!” says Rich, “man, that sounds like rulez.” But Poe reminds him that in school, rulez=coolz. True dat. They get dressed in some major nerd attire and enter the world of swords and sorcery as they take the guise of Sorsaron the Barbarian and the powerful Mage, Brawln. Together they infiltrate the gang and start up the campaign that will take these drug-dealing preteens downtown. That’s right! We’re watching the remake of Conan the Barbarian. We already watched Conan the Destroyer for BMT so this will complete the complete Conan set… until the next remake comes out. This was produced by Boaz Davidson, who also produced the Nic Cage classic and BMT HoFer The Wicker Man… man, this guy loves making shitty remakes. Let’s go!

(Wow, beautiful curve right there. This is a set it and forget it definitely below average film. Like … a kind of film you can enjoy depending (sub 5.0 is where it starts to get dicey), but also not even close to the average (which is around 6.2))

Leonard Maltin – 2.5 stars –  Raised by a fearless tribal leader, Conan seeks revenge on the rival who brought death and destruction to his father and community. While on his quest he meets a woman who is being hunted by the same evildoers for her “pure blood.” New look at Robert E. Howard’s pulp-fiction hero may not be intellectually stimulating, but it’s never dull, with great action scenes, visual effects, and two formidable villains: warlord Lang and McGowan, as his sorceress daughter. Extremely violent.

(For the record he gave this the same review as the original, which honestly could very well be fair. The “extremely violent” part at the end is pretty amusing. It doesn’t really get me excited for the film, but it doesn’t make me worried either. Just kind of meh.)

(This soundtrack makes me worried. Kind of right there in the thick of the 300 fad of washed out colors which is just now dying ten years later. It looks terrible, but I will withhold judgment. A Conan film is always about the representation of Conan in my opinion. Momoa looks terrible in the trailer, but we’ll see.)

Directors – Marcus Nispel – (Future BMT: The Texas Chainsaw Massacre; BMT: Conan the Barbarian; Pathfinder; Friday the 13th; Notes: He was a very prolific music video director up until 2000. Notably a friend of Arnold Schwarzenegger, he almost directed End of Days.)

Writers – Thomas Dean Donnelly and Joshua Oppenheimer (written by) – (Future BMT: Dylan Dog: Dead of Night; Sahara; BMT: A Sound of Thunder; Conan the Barbarian; Notes: Not much information on these guys. They are adapting Mandrake the Magician though, which should be … frankly it sounds like a terrible idea.)

Sean Hood (written by) – (Known For: Cube 2: Hypercube; Future BMT: Halloween: Resurrection; The Crow: Wicked Prayer; BMT: The Legend of Hercules; Conan the Barbarian; Notes: Started his career as a set dresser on Twin Peaks. Is known for horror and swords-and-sandals films.)

Robert E. Howard (character of Conan) – (Known For: Conan the Barbarian; Solomon Kane; Future BMT: Red Sonja; Kull the Conqueror; BMT: Conan the Barbarian; Conan the Destroyer; Notes: Wrote the Conan pulp novels in the 1930s. They are interesting and short, reading either the introduction (which is super weird) or one of the novels involving Belit the pirate queen is well worth the time I think.)

Rose McGowan – (Known For: Scream; Death Proof; Planet Terror; Grindhouse; Machete; Class of 1999; The Doom Generation; Going All the Way; Fifty Dead Men Walking; Future BMT: Bio-Dome; The Black Dahlia; Ready to Rumble; Jawbreaker; California Man; Paranormal: White Noise; Nowhere; Southie; BMT: Monkeybone; Conan the Barbarian; Phantoms; Notes: Has been in the news a ton recently due to her high-profile battle with Harvey Weinstein over accusations of rape and legal settlements. Probably most famous as a television actress in Charmed.)

(Wow, catastrophic. Makes sense they scraped plans for the sequel then. That is just astonishingly bad.)

#76 for the Fantasy – Live Action genre 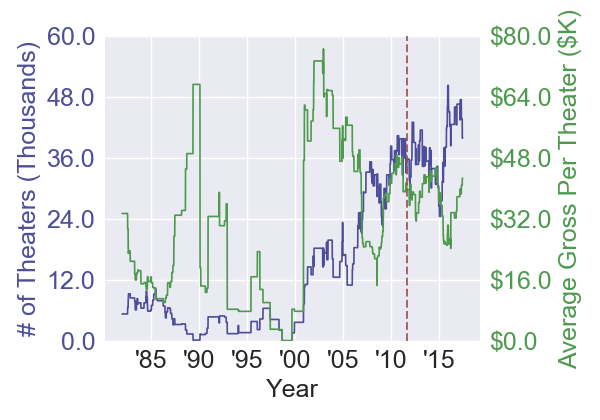 (People do love their fantasy don’t they? As crazy as it sounds the highest ranked BMT film is The Last Airbender of all things. Disney and Harry Potter have dominated the releases.)

#46 for the Revenge genre

(Kind of gross, but the genre is waning which is … good I think. Revenge isn’t particularly great for anyone usually, right? Need for Speed was the highest ranked BMT film here. This earned less than that crazy Ben-Hur remake!)

#20 for the Sword and Sorcery genre 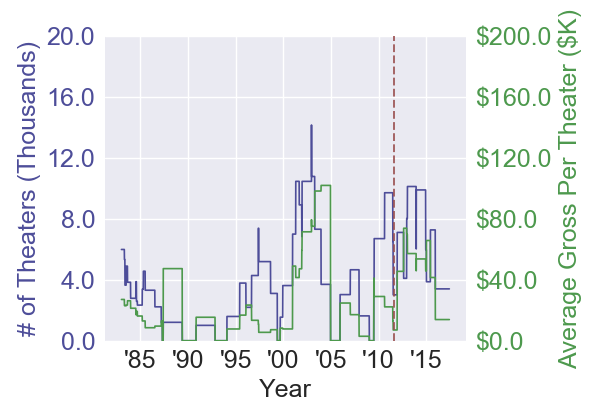 (The plot is a little enigmatic, but I guess you could say these come in waves and we are moving out of a wave at the moment. Warcraft is the most recent film listed which seems crazy, but I also am hard pressed to name another Sword and Sorcery in the meantime … kind of sad, it is a fun genre I think.)

(I don’t get this consensus. More faithful to the books? The 1982 film is extremely gory and violent. And it wasn’t really the character building that made it great … it very much took the pulp approach to the series. So I don’t really understand the point. Whatever. Reviewer Highlight: Rent the original instead. – Tom Huddleston, Time Out)

(Oh boy. This is like the artistic version of the legendary Avengers poster. Weird two-color gradient is no bueno and there is just way too much going on. That being said this actually looks somewhat artistic with some nice font and symmetry. Lands back in the middle.)

(Vercingetorix is called Druids in the United States and looks … awful. It looks kind of like the cheap Asterix films. Hercules and Caligula are classics though, pre-1980 and a 50+ BMeTric is pretty nuts. And then we’ll have truly mastered the sword and sandal epic … but who are we kidding The Legend of Hercules is the best of the bunch.)

Movie Stub – Conan the Barbarian (2011 film) (C-class) – There is a small note about expanding the critical reception, but it is already quite good. I’m not sure why whomever put that there put it as a public display instead as a plea on the talk page to be honest. Otherwise this looks like a very well maintained page will little (beyond perhaps editing the plot a bit after watching) for me to offer. Good example of the “(YEAR film)” title requirement on wikipedia, because the name is the same as (1) The character from the original pulp novels, and (2) The original 1982 adaptation.

Notes – Jason Momoa enrolled in an intense six-week training program at a stunt and martial arts academy in Los Angeles for his part, while still finalizing negotiations for the film.

Jason Momoa is by his own admission afraid of horses, so all his horse riding scenes had to either be faked or filmed with doubles. (hahaha, this is like the thing about how Gary Busey is allergic to horse saliva and has a rider in his contracts that prohibits them from being on set)

Rachel Nichols had a body double for her sex scene. (As I assume most ladies do)

Arnold Schwarzenegger was offered the role of Corin, Conan’s father, but declined. Schwarzenegger played Conan in the original Conan the Barbarian (1982), of which this film is a remake. (eeeeh, is it a remake though? Or is it a separate adaptation of the pulp novels. I guess we’ll see if the story is the same … because if it is then yeah, it’s a remake)

Jason Momoa and Rachel Nichols would later be offered the roles of Drax the Destroyer and Gamora in Guardians of the Galaxy (2014). Both turned the roles down, and Dave Bautista and Zoe Saldana, respectively, took them. (huh I wonder why Momoa turns down Drax. Maybe he was already in discussion for Aquaman)

Dolph Lundgren, then Mickey Rourke, were in talks to play Corin, Conan’s father, but Rourke turned it down to do Immortals (2011) before Ron Perlman was cast. (Oh, that reminds me, we need to watch Immortals)

After production on the film was completed, Jason Momoa (Conan) went on to star as Khal Drogo in the first season of HBO’s Game of Thrones (2011). Nonso Anozie, who played Conan’s shipmate Artus, would star as Xaro Xhoan Daxos in the second season of the series.

Kellan Lutz and Jared Padalecki were considered for the lead, which eventually went to Jason Momoa. (Noooooooo, my boy Lutz could have been Conan? And they didn’t just throw money at him?!)

The film was originally rumored to be a remake of the original Conan the Barbarian (1982). It was revealed that the film was not a remake, but a reboot, and it had been intended to be more true to the original stories by Robert E. Howard. (I knew it!)

A “Conan” sequel was abandoned when this film did poorly at the box-office. However, Arnold Schwarzenegger, who played Conan in the original Conan the Barbarian (1982), announced he was to return in the role of Conan, which he last played in 1984, in a long-awaited second sequel “The Legend of Conan”, which will be a direct sequel to the 1982 film. (Wait … it wouldn’t be a sequel to Conan the Destroyer? Also this isn’t happening. Also, I think Conan the Conqueror was the most recent rumored title)

While pre-production, Conan was a temporary title for the film, until it was changed to Conan 3D. Finally, early in December 2010, the title was definitely changed to Conan the Barbarian, as was titled the 1982 film. (Conan 3D is such a bad name)