“And that’s the story of how I cheated on my wife multiple times, destroyed my family, and continued to be a rich asshole. Now where to start concerning the mailman?” sighs Colonel Von Freed. Jamie looks grimly at Patrick. They endured his story of serial philandering for the last two hours and, considering the length of his sigh, the story of the fraudster mailman seems to be even longer. Suddenly a group of horses run by with grimy men clinging to their backs. Letters flutter about them as they watch them disappear in a cloud of dust. “Aha, the chase is afoot,” sighs the Colonel, “it’s helicopter time.” With that the Colonel snaps his fingers and a helicopter suddenly appears over the horizon. Gatling guns ablaze, the helicopter swoops towards the mailmen, who shields their eyes and scatter in every direction. One remains behind, the leader. “The choice is yours, mailman,” we say as we approach, “hand over the medallion or get another taste of our helicopter.” The mailman smiles. “Oh really, you’re gonna blow me away? I don’t think so,” he laughs, “that would be against the rules.” In shock Jamie and Patrick look at each other. What rules? Rulez=coolz and this could spell trouble. Another mailman returns and joins the first. Uncoiling the scarf from his face Jamie and Patrick gasp. Twins. They rip their sleeves off their shirts to reveal the secret tattoos of the twins engraved on their well-toned arms. “He isn’t lying, Colonel,” Jamie says. “This will not end peacefully. It’s the way of the Twins. They have challenged our twin prowess,” confirms Patrick. The mailmen scream in unison, “It’s a Double Dragon challenge, Bad Movie Twins! A fight for the medallion. A fight for destiny. A challenge that can only end with blood.” That’s right! We are watching Double Dragon, one of the many terrible video game films made in the *checks notes* ever… there has never been a good one. Apparently though the worst films of all time wiki page only has room for one video game film and that’s Alone in the Dark, which is no fun. At least this should be some fun to watch. Reading about it a bit apparently they changed the script so that Jimmy and Billy Lee weren’t twins but just brothers because the actors didn’t look enough alike. Bullshit. Just for that it should be on the worst of all time list. Let’s go! 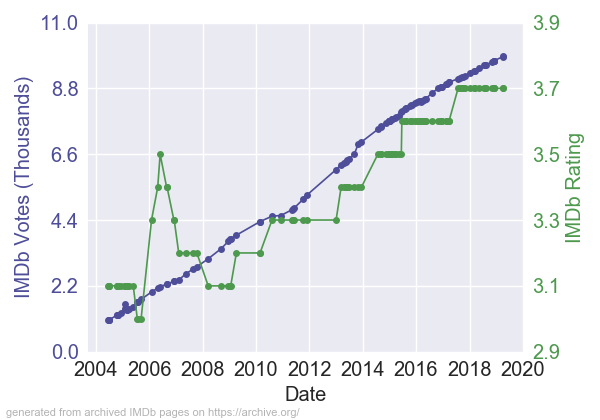 (Below 4.0 is incredible. And while climbing a bit (pretty much unavoidable when the rating is that low), for a film from the early-90s that is very impressive. Pretty close to that 75+ pantheon, although now it’ll never make it.)

Leonard Maltin – 1.5 stars –  In the junky, gang-dominated post-earthquake “New Angeles” of 2007, martial artist brothers Dacascos and Wolf battle evil billionaire Patrick for the possession of a two-part Chinese medallion that grants mystical powers. Sometimes lively but mostly silly and tedious; based on an arcade game.

(This review is mostly silly and tedious, so take that! But honestly, this feels like Maltin fell asleep in the middle of the review. Although, then again, there is a very nice semi-colon right near the end. Love it.)

(My God the acting! AND LOOK WHO’S GOT IT! Whooooooaaaaaaaa! Man the 90s, what a time to be alive. Everything was so straight up raaaaaaad. Karate and hacking and like … video games. It is ridic. Too ridic to quit. I’m amped.)

Directors – James Yukich – (BMT: Double Dragon; Notes: He was a music video director for the most part, including directing videos for Bruno, Bruce Willis’ alter ego.)

Neal Shusterman (story) – (BMT: Double Dragon; Notes: Quite an accomplished writer, including nine or ten different series. Also wrote a ton of How to Host a Murder games.)

Mark Dacascos – (Known For: Brotherhood of the Wolf; Future BMT: The Island of Dr. Moreau; Code Name: The Cleaner; Showdown in Manila; Nomad: The Warrior; BMT: Double Dragon; Cradle 2 the Grave; Notes: A martial artist. Competed in the 9th season of Dancing with the Stars.)

Scott Wolf – (Known For: Teenage Mutant Ninja Turtles; Go; White Squall; Future BMT: The Evening Star; All I Want for Christmas; BMT: Double Dragon; Notes: Most famous for his role on Party of Five. Had some success in television across the years. Has a mildly famous cousin Josh Wolf.)

(Somehow a catastrophe despite basically costing nothing. Having watched the film you see all $8 million on screen, it is pretty impressive how far they stretch that.)

#116 for the Action – Martial Arts genre

(Beat out the previous low gross by a BMT film by … Gymkata, wowza. This came in right when martial arts film was huge, but they were progressively making less and less money. At least according to Box Office Mojo this genre is basically non-existent at this point.)

#38 for the Video Game Adaptation genre

(Somehow less than In the Name of the King: A Dungeon Siege Tale as well! A film intentionally made to be a failure. Right at the beginning of this genre which has been trying to break through for several years now.)

(A lot lower than I would expected to be honest, it felt like something you’d be like “ambitious, yet on a shoestring budget, and somehow not as bad as you would expect”. Reviewer Highlight: Even kids won’t get much of a kick out of this high-energy, low-IQ futuristic slugfest. – Brian Lowry, Variety)

(Well I know what Patrick is getting for Christmas. This is quite literally amazing. It’s taken everything I love in a poster and taken it to an extreme that makes it terrible. Love fonts? We got two of the craziest. Love bold colors? How about two jarringly bright ones? Want it to tell a story? This got shit everywhere.)

Two halves of an ancient puzzle are the only hope. (D-)

(Should have just went for the first one which is fine enough. Not sure what it’s really saying, but they are words that make the film sound important. The second is nonsense and I’m not sure is even proper english.)

(We only have horror films left. Horror films will tend to have teenage girls I guess, so that makes sense. We swept the non-horror films real quick though.)

A video game featuring motion captured sprites like Mortal Kombat was concepted to co-inside with the movie, having the actors of the film and their stunt doubles provide the captured images. However it was deemed it could not be completed in the same amount of time as the movie, so was scrapped. After the movies release the film studio admitted it was a stroke of luck the game didn’t go ahead. The film would later have a Japan-only, tie in, fighting game of the same name, developed by Technos Japan under the license of SNK Playmore, ported to the Neo Geo MVS and the Neo-Geo CD in 1995 as well as the PlayStation in 1996. (Yeah that sounds like a terrible idea)

The boat chase was filmed on the Cuyahoga River in Northeast Ohio. It climaxes with an explosion which used 700 gallons of gasoline combined with 200 gallons of alcohol. Despite warnings the night before on several news channels, the explosion caused Cleveland residents to panic, leading to 210 phone calls to emergency services over ten minutes. (Wow, I wouldn’t have thought that was in Ohio, I just thought it was in a kind of isolated, industrial, run-down part of the LA coastline somewhere)

Dozens of arcade games appear in the Power Corps hideout. DOUBLE DRAGON is one of them. It’s visible when Jimmy (possessed by Kogo Shuko) tries to kick Billy but misses and shatters the game screen. (Yeah, it is terrible. It sucks)

In one scene, Kogo Shuko asks his henchmen (Huey and Lewis), “Huey, Lewis. Any news?” a reference to the band Huey Lewis and the News. (Yeah that also sucked)

According to editor Danny Retz the alley where the Lee brothers are about to face off with Abobo was shot in downtown Los Angeles. “It was used by junkies and other nefarious persons and had to be steam clean before shooting could be done.” said Danny.

First-time director Jim Yukich summarized his approach to the film: “Our characters are like normal kids – three kids on an adventure, so we didn’t want to make something that kids would almost be too afraid to see. … I’d like to make it in a funnier, light-hearted vein.” (Basically the Batman & Robin approach. “You’re making a video game, it’s ridiculous, remember” was probably shouted)

The plot from the game is originally about two martial artists which is a blue-suited young man named Billy “Hammer” Lee and a red-suited twin brother Jimmy “Spike” Lee, as they fight their way into the turf of the Black Warriors gang (with Linda and Abobo as members) who assaulted and kidnapped their love interest Marian, the martial arts brothers won’t stop at nothing to rescue her. After going through skirmishes lead by Abobo and Jeff at a city slum, a factory, the woods and the gangs hideout; Billy and Jimmy reach the lair where the have a showdown with the gang’s machine gun wielding leader who is the Big Boss and they defeat him, also resulting in a conflict where Billy and Jimmy fight to the death over the determination of who will win the affections of Marian.