Jamie stares, mouth agape, as Santa recounts his gritty origin story. Long ago the Coca-Cola Corporation devised an advertising scheme around a jolly man in a red suit. Unbeknownst to them this was the final stage of a dark prophecy that brought him forth from Hell into this world. However, a family of elves took pity on the vile creature and decided to use him for good instead of evil. While Santa has struggled with why he was preserved and let loose on the other monsters of the realm, using his well-oiled muscles to rip them to shreds, he has come to terms with his terrible power… with that Santa takes a long satisfying sip of a Coca-Cola and looks at Jamie, who is weeping uncontrollably. Suddenly Patrick has an idea, “wait, Santa. Did you say that the Coca-Cola Corporation created you in this world using an advertising scheme in our world?” Santa nods, “and it was a truly terrible advertising scheme at that. Craven capitalist cynicism,” he says with a look of disgust on his face. Disgust that can only be washed away by the refreshing taste of a delicious Coke. Patrick shakes Jamie out of his stupor, “Don’t you see? It was within us the whole time.” Jamie nods, “You mean love?” Patrick shakes his head, “no, not love. Something even better. Bad movies. Rich and Poe aren’t here yet because our first film was a wild critical success.” Jamie’s eyes alight, “My god, a sequel… but how do we get back home so we can write it?” Patrick ponders for a second and remembers the great power he tapped into in order to save Santa. He reaches for it again, but this time the query fails. “You try,” he tells Jamie, but within him there is no light… he can only see the one in Patrick. He reaches for that and *pop* they are back in their apartment. They stare in wonder and clap hands in a manly bro hand hug. Time to get to work. They don their cable-knit sweaters, hop in their Volvo and head to Brooklyn. That’s right! We’re transitioning from the Worst Films Ever Rejects into a cycle consisting of films that Siskel and Ebert put on one of their end of year worst films lists. These leads us right to another Eddie Murphy special with Vampire in Brooklyn, his attempt to cash in on that sweet vampire money. This is also the second film where Murphy played multiple roles. In this case Maximilian, Preacher Pauly, and Guido… well that already sounds offensive. Let’s go! 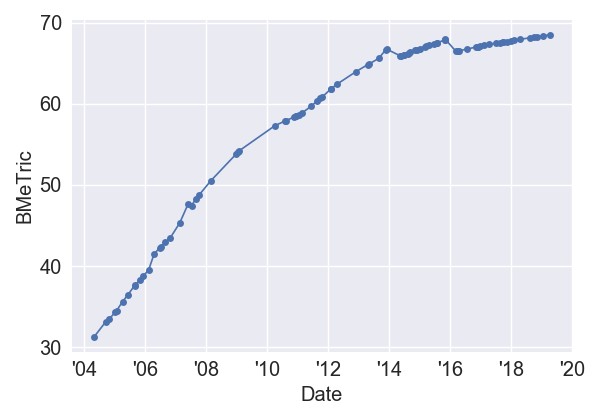 (Very consistent across the years, and impressively low. Heartening. While I knew of this film obviously, it is nice to see it have a bit of cred among the people.)

Leonard Maltin – 2 stars –  Sleek Caribbean vampire Murphy, to perpetuate his race, needs to persuade Brooklyn cop Bassett that she’s his soul mate. Oddball film has Murphy cracking jokes, but he’s thoroughly evil; on the other hand, it’s not scary enough to work as a horror film … and it’s overlong, to boot.

(Ah classic. This is my problem with almost all multi-genre films. It seems like it isn’t a good comedy, or a good horror film. I find that a lot of these types of films are graded on a curve as a good-for-what-it-is in that much smaller (and worse) sub-genre. There are exceptions though, like Shaun of the Dead.)

(Yeah doesn’t seem very funny. Just a bunch of corny vampire jokes. And Maltin seems to be correct, it seems kind of too true to vampire lore to be anything but a horror film in spirit.)

Directors – Wes Craven – (Known For: Scream; A Nightmare on Elm Street; Scream 4; Scream 2; Red Eye; The Last House on the Left; The Hills Have Eyes; The People Under the Stairs; Swamp Thing; Paris, je t’aime; New Nightmare; The Serpent and the Rainbow; Music of the Heart; Future BMT: My Soul to Take; Cursed; The Hills Have Eyes Part II; Scream 3; Shocker; Deadly Blessing; BMT: Vampire in Brooklyn; Deadly Friend; Notes: An original of the slasher genre, and is credited with bringing it back with the self-referential Scream series. Died in 2015.)

Vernon Lynch (story) – (BMT: Vampire in Brooklyn; Notes: Half-brother of Eddie Murphy. This was a truly a family affair.)

Charlie Murphy (story) (as Charles Murphy & screenplay) (as Charles Murphy) – (BMT: Norbit; Vampire in Brooklyn; Razzie Notes: Nominee for Worst Screenplay for Norbit in 2008; Notes: We did it. Interestingly it feels like whenever Murphy is looking to be on the ropes he dusts off a script he and his brother wrote. This was the end of a long fall which ended with a tack to family friendly films with the Nutty Professor. Norbit kind of marks the end of Murphy’s second leading man career.)

Michael Lucker (screenplay) – (Known For: Spirit: Stallion of the Cimarron; Home on the Range; BMT: Vampire in Brooklyn; Notes: Wrote a bunch of those direct-to-video sequels to Disney films back in the days. Seems to produce now.)

Chris Parker (screenplay) (as Christopher Parker) – (Known For: Heaven Is for Real; BMT: Vampire in Brooklyn; Battle of the Year; Notes: Appears to maybe be doing uncredited writing for animated films. There is little about him online.)

Actors – Eddie Murphy – (Known For: Mulan; Trading Places; Shrek; Coming to America; Beverly Hills Cop; Shrek 2; Doctor Dolittle; Shrek the Third; Shrek Forever After; Beverly Hills Cop II; The Nutty Professor; Life; Dreamgirls; Boomerang; 48 Hrs.; Tower Heist; Bowfinger; Dr. Dolittle 2; Imagine That; Future BMT: Nutty Professor II: The Klumps; The Haunted Mansion; Meet Dave; Holy Man; Showtime; Daddy Day Care; Metro; The Distinguished Gentleman; BMT: Norbit; The Adventures of Pluto Nash; Vampire in Brooklyn; I Spy; Beverly Hills Cop III; Another 48 Hrs.; The Golden Child; A Thousand Words; Harlem Nights; Razzie Notes: Winner for Worst Screenplay for Harlem Nights in 1990; Winner for Worst Actor, Worst Supporting Actor, and Worst Supporting Actress for Norbit in 2008; Winner for Worst Actor of the Decade in 2010 for I Spy, Imagine That, Meet Dave, Norbit, Showtime, and The Adventures of Pluto Nash; Nominee for Worst Director for Harlem Nights in 1990; Nominee for Worst Screenplay, and Worst Screen Couple for Norbit in 2008; Nominee for Worst Actor in 2003 for I Spy, Showtime, and The Adventures of Pluto Nash; in 2009 for Meet Dave; in 2010 for Imagine That; and in 2013 for A Thousand Words; and Nominee for Worst Screen Couple in 2003 for I Spy, Showtime, and The Adventures of Pluto Nash; and in 2009 for Meet Dave; Notes: Apparently Pete Davidson bought a vintage magazine featuring Eddie Murphy for $45 the other day … fun.)

Angela Bassett – (Known For: Bumblebee; Black Panther; Mission: Impossible – Fallout; Contact; Kindergarten Cop; Mr. & Mrs. Smith; Meet the Robinsons; Olympus Has Fallen; Boyz n the Hood; Malcolm X; Strange Days; What’s Love Got to Do with It; The Score; Notorious; White Bird in a Blizzard; Chi-Raq; Waiting to Exhale; Akeelah and the Bee; F/X; How Stella Got Her Groove Back; Future BMT: Supernova; Meet the Browns; Green Lantern; Survivor; Masked and Anonymous; Innocent Blood; Gospel Hill; BMT: Vampire in Brooklyn; London Has Fallen; This Means War; Notes: She’s done some voice work for Bojack Horseman. Nominated for Best Actress for What’s Love Got to Do with It.)

(That seems really low. I imagine Eddie Murphy was getting paid multiple millions of dollars to appear in it, so almost definitely a bomb.)

#30 for the Horror Comedy genre

(This is what I mean, I don’t really get why they are trying to make horror-comedies happen. Blank-comedy as a genre is a cool idea. When done right it is brilliant as it is able to skewer the non-comedy genre like nothing else can (see Cabin in the Woods, Shaun of the Dead, and Hot Fuzz). But they are obviously really hard to make. Making a horror film is hard. Making a comedy is really hard. Doing both at the same time is double hard. I literally think Cabin in the Woods is the last good one from that Box Office Mojo list.)

#35 for the Vampire genre 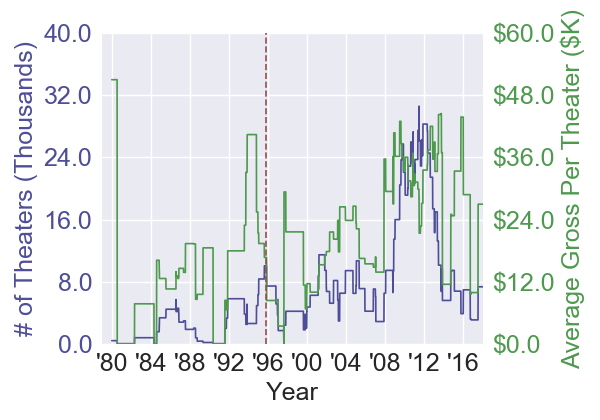 (We might as well ignore that graph, the giant bump is just Twilight and the copycats there. Interesting nonetheless.)

Rotten Tomatoes – 10% (3/29): Neither scary nor very funny, this misguided effort never lives up to its premise.

(Yeah, see. The double genre ploy almost never works … except for Marvel films which manage to be not very funny comedies and just ok action films, but people kind of accept those as “good” action-comedies.)

(I think my favorite genre of film poster is the “I’m a giant star poster.” Best recent example was The Mummy, which made it seem like Tom Cruise was the titular mummy. Here we get more a story with the moon and the cityscape, but let’s not get it twisted. It’s the Eddie Murphy show and I’m excited.)

Tagline(s) – A comic tale of horror and seduction. (D)

(A lot of genres being thrown around. So it’s a comedy-horror-romance? Cool cool cool. In fact we don’t learn much about the film other than three very broad genres. Also as bland as you can make it.)

(Wowza. We need to up our vampire game … although to be fair I’ve seen all of the Twilight films in my free time (my life!) so it really is just a matter of doing a re-watch.)

Notes – Sonja Davis, Angela Bassett’s stunt double, died in an accident on the set. (Oh no, I forgot about this. Very sad).

On The Directors (1997), Wes Craven suggested that Eddie Murphy ignored his requests to play the character vulnerable, and felt compelled to showcase his comedic talents. (Wait a second! Later on in an interview Charlie Murphy claimed Wes Craven wanted it to be a comedy!)

Final film of Ray Combs. He died soon after.

In a November 2011 interview with “Rolling Stone”, Eddie Murphy stated that he made this movie for one reason: Paramount agreed to release The Nutty Professor (1996)’s rights in exchange for finishing his deal with the studio. Murphy also said that the wig his character wore was so awful it immediately made people despise the film. (Huh, interesting. So Murphy had the idea to basically reinvent his career prior to making the film. And then probably used his script to finish things off, see the next note).

Eddie Murphy wouldn’t write another story until Norbit (2007), twelve years later. Interestingly, his co-writer of both movies was his brother Charlie Murphy. (Yeah, again, I think they write scripts and then just leave them aside until the point where they are desperate to get something going. Murphy had had a few bad misses leading up to this).

According to Charlie Murphy, the movie was meant to be a straight horror movie with no laughs but Wes Craven brought a different focus to the film. (This contradicts the above note. I’m not sure which one I believe. This might seem unlikely, but Craven would use humor in Scream to satirize the slasher genre in Scream only a few years later)

This is Angela Bassett’s second vampire movie. She previously starred in Innocent Blood (1992). Bassett would also play a vampire many years later in season 5 of American Horror Story (2011). (That is actually kind of a fun fact)

First horror-comedy for Eddie Murphy. He would star in The Haunted Mansion (2003) eight years later. (Ooooooof, neither of those were particularly good).