A small note prior to this post: Last July we decided to take a look back at the movies that we watched over five years ago and choose a Hall of Fame class, five movies that we thought embodied BMT in some way. Perhaps they were particularly bad, or an example of a specific bad movie trope, whatever, something made them stand out as special in our minds. Since we didn’t do email previews back in 2011 we also decided to provide a preview for the movie as well. This is the third in a series of five leading up to our yearly awards the Smaddies Baddies. A recap (Hall of Fame speech really) will follow immediate afterwards to explain why the movie was chosen, things we loved about the movie, and things we discovered upon second viewing. Enjoy! 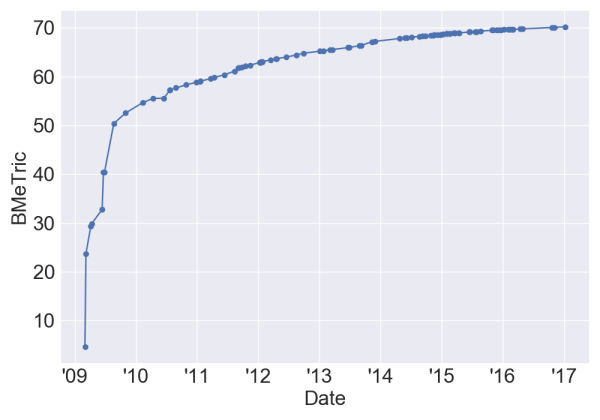 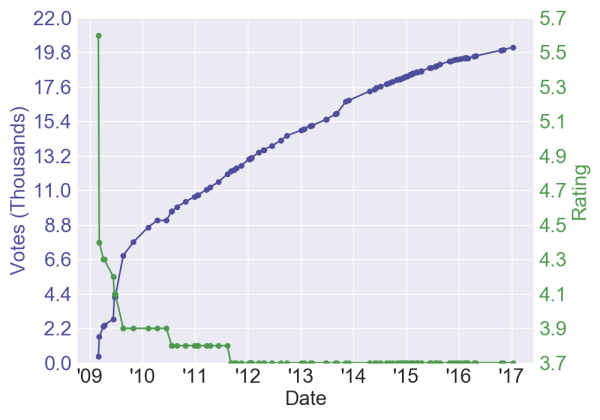 (I think this plot is a good argument as to Street Fighter’s lasting bad movie cred. A 3.7 is a comically low IMDb score, a score that, if this was a mere below-average or middling bad movie would have steadily crept higher as the thousands of votes flowed in since 2010. But it has basically just stayed constant around 3.8 since then. As I argued in The Wicker Man preview, it is the staying power that I think could be the defining feature of a good-bad movie. It is a movie people seek out, watch, and universally agree is garbage. And we have another one here. And of course 70+ BMeTric is nothing to dismiss.)

Leonard Maltin – BOMB –  Pointless new film version of the popular video game series finds pretty martial arts-trained Asian-American Chin-Li (Kreuk) spurred into action in Bangkok after her father is kidnapped. Sher uses all her wiles to snuff out the main bad guy, local crime lord McDonough, and his henchmen, led by the imposing Duncan. The 1987 game inspired a 1994 version which is Citizen Kane compared to this inept action vehicle, where even the centerpiece fight sequences are lamely choreographed and hopelessly contrived. When Interpol agent Klein yells, “Bomb! Get out now!” it would be wise to heed his advice.

(Doesn’t he say that at the end of the movie Leonard? Too little too late I would assume. Yeah, oddly a somewhat rare BOMB from Leonard within our Hall of Fame so far. I might not go so far to say the 1994 movie is that much better, but this one does stick out as a complete mess when I think about it. So maybe a cheesy Van Damme barely-movie is better than that. Solid hyphen game early by Leonard as well.)

(Wow, that was actually really good. Basically as good a trailer as I could have possibly expected for this film. Makes it out like it’s going to be non-stop action street fights between characters you love. I was jazzed by the end. Am I sure this is a terrible film? Looks great.)

Directors – Andrzej Bartkowiak – (BMT: Street Fighter: The Legend of Chun-Li; Doom; Exit Wounds; Cradle 2 the Grave; Romeo Must Die; Notes: It just occurred to me that if you take Exit Wounds (DMX), Cradle 2 the Grave (DMX, Jet Li), and Romeo Must Die (Jet Li) you get a nice little chain reaction. I wish Jet Li and Seagal had been in a movie. We’ve seen Doom and Romeo Must Die, but finishing his filmography is a must. He is more well known as a cinematographer and his collaborations with Sidney Lumet.)

Writers – Justin Marks (screenplay) – (Known For: The Jungle Book; BMT: Street Fighter: The Legend of Chun-Li; Notes: Kind of fascinating career just because he wrote Street Fighter for release in 2009, and then didn’t write another feature until 2016 with The Jungle Book. He now is well on his way, with Jungle Book 2, Top Gun 2, Shadow of the Colossus (video game adaptation), and FBP Federal Bureau of Physics (comic book adaptation) in production. I’d be willing to bet three of those will be BMT or borderline, can you guess which ones? I am stunned this movie had a single credited writer.)

Actors – Kristin Kreuk – (Known For: EuroTrip; BMT: Street Fighter: The Legend of Chun-Li; Ecstasy; Notes: One of her first roles was as the ex-girlfriend Fiona in EuroTrip, otherwise she’s stuck to mostly television (like Smallville). She is Canadian and has a purple belt in karate.)

(A complete and utter disaster. If that budget is correct this would probably be one of the biggest bombs of that year, and only is saved a bit from being a legend by “only” having a $50 million dollar budget. To be frank I don’t really believe that, at least some of it has to be exaggeration for tax reasons.)

#95 for the Action – Martial Arts genre 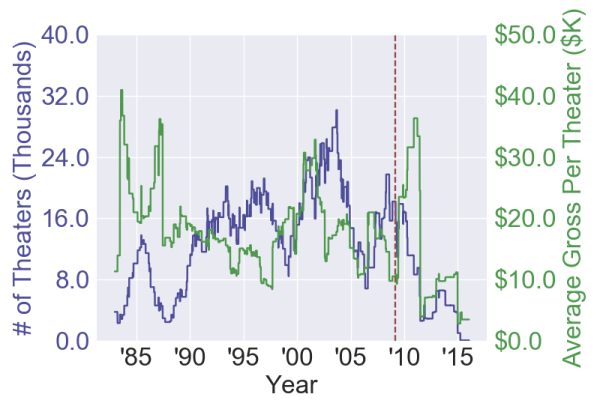 (This plot is actually kind of sad. Initial thoughts: The 90s boom is basically people like Seagal and Van Damme. Then there was a little dip before Jackie Chan ushered in another foreign / comedy boom for the genre. This came right in the final gasp there with Rush Hour 3 and Transporter 3 kind of having the genre die off. Now … is it possible that martial arts has been relegated to VOD? Are we entering an era of whole genres being shunned from theatrical release in favor of tentpoles? It makes me a bit sad, but then again I can’t think of a situation in which I would personally go and see a martial arts film in theaters. Crouching Tiger might literally have been the only one I’ve ever seen in theaters to be honest. This movie is below Dragonball: Evolution on that chart … I’ll let that be a closing statement of sorts.)

#63 for the Action Heroine genre 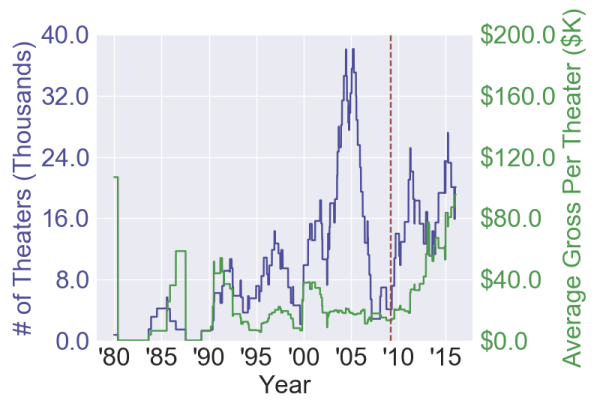 (THIS MOVIE IS BELOW CUTTHROAT ISLAND ON THAT CHART. That movie literally destroyed a production company! That giant peak around 2005: Lara Croft 2, Underworld, Catwoman, Elektra, Miss Congeniality 2, Charlie’s Angels 2, Resident Evil 2, Blade 3, Domino, Aeon Flux, Underworld 2, Ultraviolet, Resident Evil 3 … that’s a lot of terrible movies. And note how little money they made on average! And naturally since 2010 the action heroine has been a huge seller for Hollywood. I wish I could say this movie blazed a trail … but it didn’t. It merely allowed Hollywood to get the garbage juice out of its system before getting serious.)

#31 for the Video Game Adaptation genre 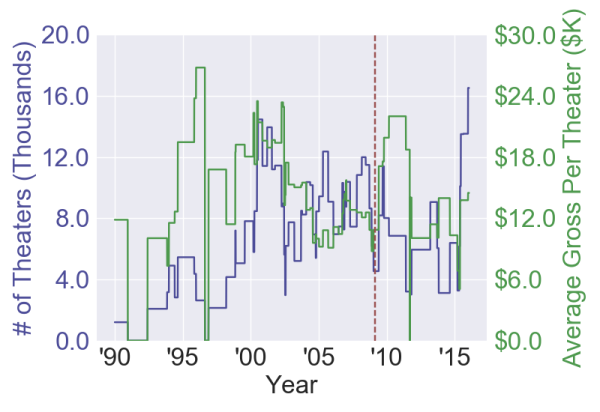 (We saw Warcraft this year, and Hitman Agent 47 the year before among several BMT video game adaptations. Street Fighter Legend of Chun Li sits right above Alone in the Dark the Uwe Bol classic … so not great. Video game adaptations still make less than the martial arts genre of the 90’s, which is unimpressive to say the least. Naturally they are looking to have that change over the next few years you would imagine, but this multi-bomb year probably didn’t help matters. Five video game adaptations came out this year, that is the most ever according to this chart. Someday there will be a successful video game adaptation. It will happen.)

(Less than 10% on Rotten Tomatoes is extremely impressive. Doing it with over 50 reviews is incredible. I wonder who they are talking about when they say miscast performers … I’m so sorry Chris Klein. So so sorry.) 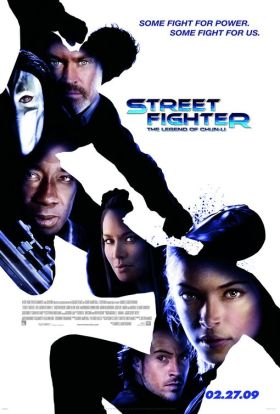 (That is unfortunate. A truly ridiculous color scheme and spacing. Glad we at least get a unique font that would make it hard to create Sklog Fighter: The Legend of Jamie.)

(Well since we aren’t ever doing Gunday we will complete this genre with Grease 2 which has to be done at some point. Solid list obviously, but I assume a few films might be a stretch. There was around 1200 films that claim a gangster keyword (around that). All of these vaguely make sense, but was there really a “gangster” in The Avengers for example? Questionable.)

Notes – Back in 2003, Jean-Claude Van Damme was working on a sequel to the original Street Fighter movie titled “Street Fighter II”, for Universal. Several cast members had been hired to join him in the sequel, including his Universal Soldier co-star Dolph Lundgren in an unrevealed role, Australian actress Holly Valance would have replaced Kylie Minogue as Cammy White, and Damian Chapa would have reprised his role as Ken Masters. Byron Mann was also reportedly in talks to return as Ryu Hoshi. However, after a few years of trying to get the sequel off the ground, the project never materialized and any plans for a sequel were scrapped in favor of this movie. (Would have also been terrible. People try to have nostalgia for the original, but in reality it is also terrible and a sequel without Raul Julia wouldn’t have been much better)

A potential sequel with Ryu and Ken was planned but was cancelled due of the poor box office performances of the film. (Jesus)