While Patrick creates an intricate outline for the Rich & Poe sequel, 2 Rich 2 Poe: Reclamation, Jamie paces their Brooklyn apartment slamming Mountain Dews and scratching at his cable-knit sweater. “You know what’s kind of funny?” says Patrick looking up from the page, “This is kind of like that Eddie Murphy film Vampire in Brooklyn.” Jamie looks confused and Patrick continues, “didn’t you say you were bitten by a vampire while I was in the z-universe?” Jamie nods slowly, “Oh, right. Months ago now. Guess I forgot about that.” He runs his hand over the scar, “oh well, I’m sure that’ll come back to… bite me.” And with that Jamie and Patrick laugh and laugh and laugh. Getting right back to business Patrick goes through his analytical checklist of everything he knows to make a bad movie. “Alright, so we need to recast. Let’s get Chris Klein and Neal McDonough in here to spice things up Street Fighter style. We gotta take it to New Orleans where Nic Cage butters his bread and also go to space. Add in a couple twisty-turns, a steamy sex scene, and I think we have it.” Jamie takes a look at the outline and slowly takes a sip of Dew. “You sure about this?… I mean, this sounds kind of rad.” But Patrick tells him to trust him. Ratchet this shit up to X-treme levels and it’ll get the job done. Crazy=bad, it’s a formula as old as time. “Well OK, but how do we get Rich and Poe to New Orleans?” Jamie asks scratching his head. “Easy breezy,” says Patrick, “three words for you: gun-totin’ grandma.” Jamie’s eye’s light up, “Can she be foul-mouthed?” Patrick grins, “Darn tootin’,” That’s right! We continue our journey through Siskel and Ebert’s worst of the worst by heading to a film that we’ve been saving for a rainy day. Sly Stallone films are a rare commodity that can’t be thrown around willy-nilly (particularly when they have to be saved for the Stallonian Calendar). But it felt right for this cycle as Siskel and Ebert hated it so much. It’s finally time for Stop! Or My Mom Will Shoot. Let’s go!

(It’s a bit surprising this is regressing to the mean. I would have imagined this would be a classic, and something people would be seeking out in order to specifically give it a terrible review. The regression kind of suggests that normal people are the ones mostly stumbling onto this and rating it after the fact … why would anyone watch this?)

Leonard Maltin – 1.5 stars –  Cop Stallone is joined by his loud-mouthed, gun-toting mamma (Getty), and they erase crime from the streets of L.A. One joke action-comedy which quickly wears thin; Getty’s character, meant to be funny, comes off as thoroughly obnoxious.

(Oh God. Yeah. You can tell from the trailer the movie is a complete one joke pile of garbage. Shoot. This is going to be a trainwreck.)

(Oh Jesus. It appears to just be one long aggravating joke over and over. My mother is suffocating, she doesn’t know about police business or guns, she’s interfering in my love life. Unpleasant. This isn’t going to be funny, it is going to be unpleasant.)

Directors – Roger Spottiswoode – (Known For: Tomorrow Never Dies; The 6th Day; Turner & Hooch; A Street Cat Named Bob; Deadly Pursuit; Under Fire; Shake Hands with the Devil; Future BMT: Air America; Terror Train; The Best of Times; BMT: Stop! Or My Mom Will Shoot; Notes: Wrote 48 Hrs. and was nominated for an Emmy for directing And the Band Played On in 1993.)

William Osborne (written by) – (Known For: Twins; The Scorpion King; Future BMT: Thunderbirds; Ghost in the Machine; The Real McCoy; Dr. Jekyll and Ms. Hyde; BMT: Stop! Or My Mom Will Shoot; Notes: Novelist. He is a lawyer and is married to Debra Hayward which maybe explains his involvement in movies.)

William Davies (written by) – (Known For: How to Train Your Dragon; Twins; Mia et le lion blanc; Flushed Away; Puss in Boots; The Guilty; Alien Autopsy; Future BMT: Ghost in the Machine; The Real McCoy; Dr. Jekyll and Ms. Hyde; Johnny English; Johnny English Strikes Again; Johnny English Reborn; BMT: Stop! Or My Mom Will Shoot; Razzie Notes: Winner for Worst Screenplay for Stop! Or My Mom Will Shoot in 1993; Notes: Brother of rather successful producer Michael Davies. Sold a spec-script Fool on the Hill for $4 million after Jim Carrey expressed interest in it, but it went unproduced.)

Actors – Sylvester Stallone – (Known For: Guardians of the Galaxy: Vol. 2; Creed II; Rocky; Creed; The Expendables; The Expendables 2; Spy Kids 3: Game Over; First Blood; Escape Plan; Rocky Balboa; Rocky III; Cliffhanger; Rocky II; Antz; Cop Land; Bullet to the Head; Escape to Victory; Death Race 2000; Nighthawks; Future BMT: Escape Plan II; Staying Alive; Rocky V; D-Tox; The Specialist; An Alan Smithee Film: Burn Hollywood Burn; Rambo III; Avenging Angelo; Daylight; Ratchet & Clank; Backtrace; Collection; Assassins; Rambo: First Blood Part II; Oscar; Rocky IV; BMT: Stop! Or My Mom Will Shoot; Driven; Zookeeper; Get Carter; Rhinestone; Judge Dredd; Cobra; Over the Top; The Expendables 3; Tango & Cash; Grudge Match; Lock Up; Demolition Man; Razzie Notes: Winner for Worst Director, and Worst Actor for Rocky IV in 1986; Winner for Worst Screenplay, and Worst Actor for Rambo: First Blood Part II in 1986; Winner for Worst Actor in 1985 for Rhinestone; in 1989 for Rambo III; and in 1993 for Stop! Or My Mom Will Shoot; Winner for Worst Supporting Actor for Spy Kids 3: Game Over in 2004; Winner for Worst Screen Couple in 1995 for Interview with the Vampire: The Vampire Chronicles, and The Specialist; Winner for Worst Actor of the Decade in 1990 for Cobra, Cobra, Lock Up, Lock Up, Over the Top, Over the Top, Rambo III, Rambo III, Rambo: First Blood Part II, Rambo: First Blood Part II, Rhinestone, Rocky IV, and Tango & Cash; Nominee for Worst Director for The Expendables in 2011; Nominee for Worst Screenplay in 1985 for Rhinestone; in 1986 for Rocky IV; in 1987 for Cobra; in 1989 for Rambo III; in 1991 for Rocky V; in 1994 for Cliffhanger; and in 2002 for Driven; Nominee for Worst Actor in 1987 for Cobra; in 1988 for Over the Top; in 1990 for Lock Up, and Tango & Cash; in 1991 for Rocky V; in 1992 for Oscar; in 1995 for The Specialist; in 1996 for Assassins, and Judge Dredd; in 1997 for Daylight; in 2001 for Get Carter; and in 2014 for Bullet to the Head, Escape Plan, and Grudge Match; Nominee for Worst Supporting Actor, and Worst Screen Couple for Driven in 2002; and Nominee for Worst Supporting Actor for An Alan Smithee Film: Burn Hollywood Burn in 1999; Notes: Rambo V is going to be crazy. Whether it is good or bad is immaterial. It is going to be crazy … and it is basically the only thing the news is reporting about Sly recently.)

JoBeth Williams – (Known For: Poltergeist; Wyatt Earp; Kramer vs. Kramer; The Big Chill; Stir Crazy; The Perfect Catch; The Big Year; In the Land of Women; Teachers; The Dogs of War; TiMER; Desert Bloom; Barracuda; Just Write; Future BMT: Jungle 2 Jungle; Poltergeist II: The Other Side; Switch; Dutch; BMT: Stop! Or My Mom Will Shoot; Notes: Nominated for Best Live Action Short in 1995 for On Hope. Despite that she didn’t direct anything significant in her career.)

(That is a bomb, but not as bad as one would expect … did Sly really have such clout that this films would earn like $40 million overseas? I’m not sure I believe it.)

#16 for the Mother genre

(Beats out the Pringle’s Mom’s Club which is nice. It actually made me wonder, do more “mother” films come out around Mother’s Day? A quick look and you’ll find that indeed May has traditionally had the most “mother” films released. November and December also have quite a few, but perhaps that makes sense as people will be going to the movies with family around the holidays as well.)

Rotten Tomatoes – 8% (2/26): Thoroughly witless and thuddingly unfunny, Stop! Or My Mom Will Shoot gives its mismatched stars very little to work with – and as a result, they really don’t work.

(Unfunny. It is going to be brutally unfunny. And just exasperating. Sigh. Reviewer Highlight: It is moronic beyond comprehension, an exercise in desperation during which even Sylvester Stallone, a repository of self-confidence, seems to be disheartened. – Roger Ebert, Chicago Sun-Times.) 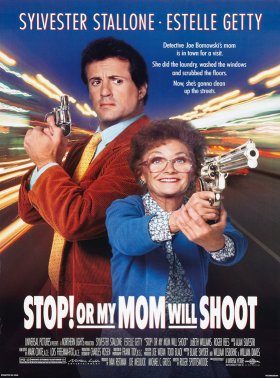 (Oh man, that’s a lot of color. Much like the very common sky background, this passing cars background in unexplainable. Even more so because it actually makes the poster hard to look at. Otherwise I’m actually OK with this because there is literally no other poster you can make. This is the poster: aimed with laser focus at capturing the Stallone-and-old-lady-with-gun market.)

Tagline(s) – Detective Joe Bomowski’s mom is in town for a visit. She did the laundry, washed the windows and scrubbed the floors. Now, she’s gonna clean up the streets. (D)

(Oh no. No! No! No! You got an old lady with a gun and Sly Stallone and you go old school paragraph tagline?! You have so much to work with! I only don’t give this an F because I liked the roundabout cleaning pun they dropped in. But come on.)

(We aren’t watching Jeepers Creepers 3, that film is legitimately made by a pedophile. Screw that.)

Notes – Sylvester Stallone and Arnold Schwarzenegger were competing against each other at that time, and Schwarzenegger faked interest in this movie in order to make Stallone audition for it. Stallone, who heard that Schwarzenegger was interested in headlining in this movie, immediately dropped everything and contacted the producers, saying that he wanted to headline. He deeply regrets this. (Oh God. What a weirdo. Definitely something Arnold would do. Watch Pumping Iron, he always seemed to be a step ahead of the other weightlifters and it wouldn’t surprise me if he was always a step ahead of Sly as well)

Sylvester Stallone considers this the worst film he’s ever done.

When Estelle Getty found out that filming the movie would involve guns, she said that she would only do the movie if there were no guns in it. The producers lied to her (and told her that there would be no guns in the movie) in order to get her to sign on. (That’s mean)

The picture was nominated for Worst Picture at the Hastings Bad Cinema Society’s 15th Stinkers Bad Movie Awards in 1992. (For reals, was this a thing back in the day. I’m very aware of it existing, but I never remember anyone actually knowing about it at the time)

When Estelle Getty is showing pictures of her son to the people that were aboard the plane, there is a black and white picture of a boy in a checkered shirt, which happens to be Sylvester Stallone as a young boy. This picture was also used in Rocky (1976), and can be seen sitting on Rocky’s mirror. (Makes sense)