We’ve made it! We’ve hit the transition from <10% RT films to our new cycle! Hooray! Our journey isn’t done yet, but the clear waters of the Calendar cycle are cleansing our palates and bringing us BMT strength. But it wouldn’t be the StreetCreditReport.com cycle without a last punch to the nuts. We’re watching one of the worst reviewed films of all time, the January 4th entry on the Calendar (and you know that’s a good date for BMT), and one of the classics in bad horror. That’s right! We’re watching the critically reviled One Missed Call. Based on the Japanese film on the same name (which was in turn based on a book), it was one of the last big J-Horror remakes released during the mid-2000s boom. It garnered the super rare 0% on RT on a startling 80 reviews. Only Ballistic: Ecks vs. Sever can compare. Let’s go!

(I know it is quite hard to stay sub-4.0 on IMDb, but my motto has become that the mark of a truly bad movie is that it won’t regress in the face of increased popularity. Basically everyone who watches the film ultimately kind of agrees that it is trash, there is no effect of a wider audience being more lenient. So this plot makes me wonder if One Missed Call deserves the legendary anticipation we have endowed it with. The film has the second most reviews for a movie with 0% on Rotten Tomatoes, so its reputation precedes itself. But this still makes me a bit skeptical.)

Leonard Maltin – BOMB –  What if you received a message on your cell phone from your future self, with the date and time of your death? No need to stay awake at nights wondering, as this film lets you know how some college students deal with just such a predicament. Another Americanized remake of a Japanese horror film (Takashi Miike’s Chakushin Ari) with a good cast wasted. So bad that the title invites pithy putdowns; it’s just too easy.

(Put yo money where your mouth is Leonard, I want to hear those pithy putdowns! I can imagine the NY Post headline (something like They Missed!), but I’m kind of hardpressed to think of any super good ones. One Missed Movie? Terrible. He has to be talking about the “miss” part of it, but my mind keeps coming back to “hard miss” which is at the very least a somewhat niche phrasing. The beginning of this review is just a very long winded description of the movie … which always seems to me like Leonard doesn’t like horror films and just decided to skip this one. He does seem very adamant that the film is bad though, so maybe he did watch it.)

(That trailer looks like a shot for shot remake of the original Japanese … with maybe a bit of Final Destination thrown in. Can’t wait for it to be aggressively not spooky-scary as well. The trailer doesn’t help itself by having the weird sound effects on the writing, just grating all around.)

Directors – Eric Valette – (Known For: La proie; BMT: One Missed Call; Notes: French filmmaker, so most of his films were never released widely in the US. Does a lot of French television including the Transporter series. I might have to check that out, I bet that could be pretty cool and help me learn French.)

Writers – Andrew Klavan (screenplay) – (Known For: True Crime; A Shock to the System; Future BMT: Don’t Say a Word; BMT: One Missed Call; Notes: A novelist and a screenwriter he could have the unique distinction of having a BMT credit for a screenplay he wrote adapting a book (One Missed Call based on Chakushin Ari) and a credit for a novel (Don’t Say a Word) which he didn’t adapt.)

Yasushi Akimoto (novel) – (Known For: Chakushin ari; BMT: One Missed Call; Notes: He is a music producer who has created some of Japan’s biggest “idol” groups including AKB48. He is the best selling lyricist in Japan with his songs exceeding $100 million in sales.)

Minako Daira (screenplay) (as Miwako Daira) – (Known For: Chakushin ari; BMT: One Missed Call; Notes: What a strange filmography, just all of the One Missed Call movies. I wonder if she was the a representative for Yasushi Akimoto when adapting his book into films? Nothing about her online.)

Actors – Edward Burns – (Known For: Saving Private Ryan; The Holiday; Friends with Kids; 27 Dresses; She’s the One; Confidence: After Dark; The Brothers McMullen; Sidewalks of New York; The Groomsmen; The Fitzgerald Family Christmas; Newlyweds; Future BMT: Life or Something Like It; Echelon Conspiracy; 15 Minutes; Man on a Ledge; Ash Wednesday; No Looking Back; BMT: One Missed Call; A Sound of Thunder; Alex Cross; Notes: Ooooo, it’s a sound of thundah. The star of that classic, and now often a micro-budget director, he sponsored a screenwriting contest through the company Scripped for a crowdsourced screenplay. As this was done in 2012 … I’m not sure it will ever actually happen.)

Shannyn Sossamon – (Known For: A Knight’s Tale; The Holiday; Kiss Kiss Bang Bang; The Rules of Attraction; Wristcutters: A Love Story; The End of Love; Life Is Hot in Cracktown; Road to Nowhere; Future BMT: Sinister 2; The Sin Eater; 40 Days and 40 Nights; The Day; Our Family Wedding; Undiscovered; BMT: One Missed Call; Notes: Sister of singer Jenny Lee Lindberg, and was a part of her band Warpaint before leaving to focus on acting. She studies dance in Los Angeles as well.)

Ana Claudia Talancón – (Known For: Fast Food Nation; El crimen del padre Amaro; Alone with Her; Sueño; The Dry Land; Future BMT: Love in the Time of Cholera; Enter the Dangerous Mind; BMT: One Missed Call; Notes: A Mexican actress and model. Nearly all of her credits are in Mexican cinema.)

(Pretty solid bomb domestic, but maybe a return worldwide. Hard to tell. The budget seems inflated though, $20 million is quite high for a horror film like this. They were probably trying for some of that sweet Ring money which made about five times as much.)

#76 for the Horror – Supernatural genre

(Awesome graph. After dying off in the late 90s (the horror bust perhaps?) it came back with a vengeance with The Sixth Sense and The Blair Witch Project in 1999. The return is still going strong, where the screens these films are getting go up and up and yet the average per screen take is just about level. Although … that might change with Rings and The Bye Bye Man being among this year’s crop. With Right around last year’s The Forest.)

#35 for the Horror Remake genre

(Comes right at the peak. I think we also have a bit more insight into maybe why the 00s are the Golden Age: remakes? This peak kind of perfectly covers the biggest years from around 2005-2010. The Ring kicked off the J-Horror remakes in 2002, but there hasn’t been a remake since 2015 according to Box Office Mojo. They’ll go back to the well eventually, I’m sure of it. This comes in several spots below The Fog … not a good look.) 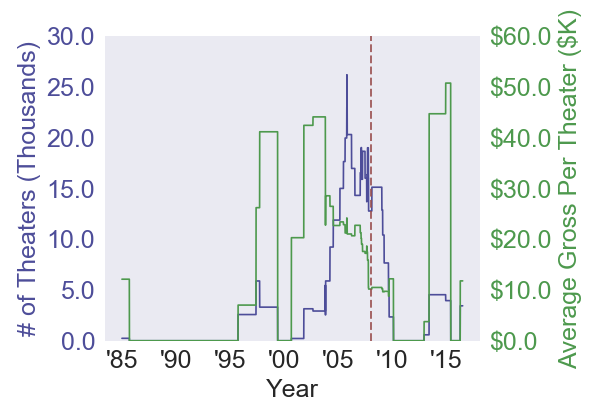 (Same as above basically, big right after The Ring, but basically died off as original (micro budget) horror came back into style. With VOD likely being a big destination for horror in the future I would doubt budgets would allow for expensive IP buys, but who knows? This comes definitely below future BMT The Eye starring Jessica Alba.)

Rotten Tomatoes – 0% (0/80): One of the weakest entries in the J-horror remake sweepstakes, One Missed Call is undone by bland performances and shopworn shocks.

(uh oh, I’ll do a little on-the-fly translation for you: “This movie is not-scary and boring”. Just great. It apparently is so boring everyone just totally agreed and gave it a bad review. Please be wrong Cynical Patrick, please.) 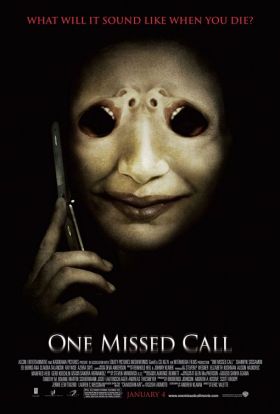 (I don’t love the poster (particularly the cheesy screaming mouths for eyes), but it doesn’t do a lot wrong either. Coloring is fine and spacing is good. Could have been more creative with the font. Slightly better than average.)

(Well… hopefully it’ll sound like I’m dying peacefully surrounded by loved ones… … … Oh, was that a rhetorical question?)

(This is just the list of the worst films according to the BMeTric. Death as a keyword is legit on something like 10000 films.)

Notes – Guillermo del Toro was offered the chance to direct, but turned it down to work on Hellboy II: The Golden Army (2008). (Good choice … well, maybe this movie would be better, but I liked Hellboy II)

Not screened for critics. (They just thought the critics would be too spooky scared I bet)

While in preparation for the film, director Eric Valette never watched the original Japanese version Chakushin ari (2003), and asked the actors not to watch it either. (… I don’t believe you. The trailer contains like a dozen identical situations as the original film. “But Patrick, maybe they adapted the book instead”. Bullshit, the book has never been translated to English. This stinks Mr. Valette, stinks of deception)

Out of 79 reviews on Rotten Tomatoes, none of of them have been positive resulting in an abysmal 0% rating as of 2015. Rotten Tomatoes awarded the film the Mouldy Tomato award for the worst reviewed film of 2008 as a result. (Yes, this is why we are doing this)

On August 2006 Ed Harris and Gabriel Byrne were both cast in undisclosed roles for the film but both dropped out due to unknown circumstances. (Maybe they read the script. Zing)

Rotten Tomatoes declared the film to be the second worst film of the 2000’s, coming behind Ballistic: Ecks vs. Sever (2002). (Which has 0% and over 100 reviews. We’ll watch it (again) eventually. It is a very strange movie. Nothing has made less sense than Ballistic did to me when I watched it)

The project was filmed in 2006 and was scheduled to be released on August 24, 2007. The film, however, was later pushed back to January 4, 2008. (Probably when people watched it. Also, a horror film in August, terrible idea. Should have been slated for October).

Was the last Japanese horror remake to be theatrically released ever since the trend started with The Ring (2002) and ended with this film in 2008. (Wow, I genuinely didn’t realize that. That is awesome. I wonder how many J-Horror remakes were released in that time.)

The 508 area code is from South Eastern, Massachusetts. (Promising settings lead, thanks IMDb)

Every single character in this film is seen using a Boost Mobile flip phone. (gross).