Fresh off our hike to Spain, Patrick and I are captured by the Absterlutely FerSher Industries goons and thrust into the Amnimals machine. Turns out it was all a ruse (what a twist!) and they didn’t want to help us get the Obsidian Dongle at all! Instead they wanted to hook our super big brains (nbd) into the machine to triangulate the location of the Dongle and grab it for themselves so they can control the world (told you the Obsidian Dongle was rad). “No way!” we say. Time to double cross and grab the Dongle right back. They didn’t count on our ninja skillz as we totally karate chop them in the wrist and get all up in that Dongle business. However, upon fleeing using our jet packs the goons reverse the Amnimals machine to brain drain us! Oh no! We are becoming extra dumb dumbs! As we crash land in Greece we know deep down what we must do with the Obsidian Dongle but keep getting distracted by the dumbest things possible. That’s right! We’re watching Meet the Spartans. Almost certainly one of the dumbest things we’ll ever watch this is also the highest BMeTric scoring films left for BMT and obviously appears on the BMT Calendar. Perfect for our Challenges entry in the cycle. We’ve avoided it for too long. Let’s go! 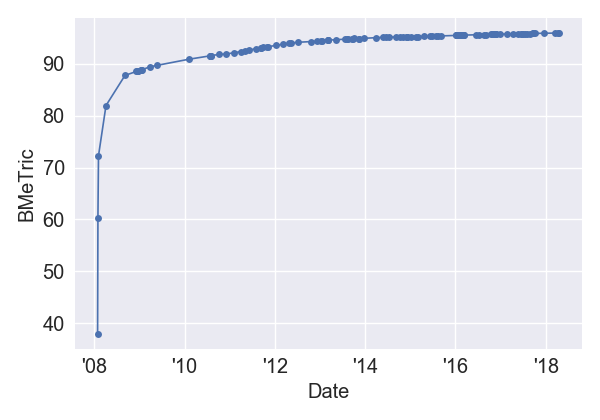 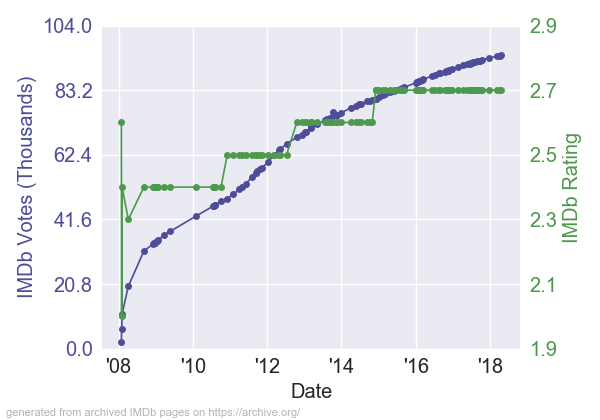 (Even this gets a little bit of that sweet sweet regression to the mean. Given that there are now nearly 100K votes on IMDb I guess it isn’t a surprise that they aren’t all ones and twos. It must get a few threes thrown to it once in a while. This is just a shade below Epic Movie as the worst (best?) BMeTric of all time.)

Leonard Maltin – BOMB –  The creators of Date Movie and Epic Movie concocted this moronic, product-placement-laden spoof of the homoeroticism of 300, aimed at adolescent boys. Plot involves King Leonidas of Sparta (Maguire) and his self-adoring, scantily clad warriors as they battle the Persians. Oodles of pop-cultural references are complete duds. Unrated version runs 87m.

(That run time pleases me, as does the kick ass hyphen game from Leonard, and that this is the second BOMB of the cycle. Funny enough looking around I think this is only the second BOMB in something like eight months, although that is slightly less clear. He is certainly precious with them.)

(Oooooof the Britney Spears part. That actress plays like four or five different parts and was in over one hundred MadTv episodes (that makes so much sense …). The film looks aggressively dumb and not funny. Why? Why are we doing this?)

Actors – Sean Maguire – (Known For: Waterland; The Dukes; BMT: Meet the Spartans; Notes: After this film he turned down Kröd Mändoon and the Flaming Sword of Fire, a British show, because he wanted to be taken more seriously. He reconsidered at the behest of his agent. He played Robin Hood in Once Upon a Time.)

Kevin Sorbo – (Known For: Soul Surfer; Let There Be Light; Future BMT: God’s Not Dead; Bitch Slap; Big Fat Important Movie; Kull the Conqueror; The Kings of Mykonos; BMT: Meet the Spartans; Notes: Hercules. Raised in Minnesota he’s done a number of Christian films recently. He claims he isn’t overly religious, although he endorsed Donald Trump for president saying that “Jesus would have voted for Trump”.)

Carmen Electra – (Known For: Scary Movie; Starsky & Hutch; Get Over It; Mr 3000; I Want Candy; Future BMT: Disaster Movie; Date Movie; Pledge This!; My Boss’s Daughter; Scary Movie 4; Dirty Love; Good Burger; Bedtime Stories; Uptown Girls; Christmas in Wonderland; Full of It; Perfume; The Mating Habits of the Earthbound Human; BMT: Epic Movie; Meet the Spartans; Cheaper by the Dozen 2; Razzie Notes: Winner for Worst Supporting Actress in 2007 for Date Movie, and Scary Movie 4; and Nominee for Worst Supporting Actress in 2005 for Starsky & Hutch; in 2006 for Dirty Love; in 2008 for Epic Movie; and in 2009 for Disaster Movie, and Meet the Spartans; Notes: I knew her mostly from MTV’s Singled Out, but her career is nuts. Fronted for a rap group in LA until being discovered by Prince, then toured with him as his opening act. Ended up getting her big break on Baywatch.)

(Solid return. Not a surprise they produced a sequel. Oh, what’s that, you think they didn’t make a sequel? Well, at one point a wikipedia page existed for Meet the Spartans 2, which now redirects to Disaster Movie. It is almost definite that they realized that making fun of 300 didn’t work any more so they transitioned the planned sequel into something more fresh. Still, not surprising that they continued on their merry way with the franchise.)

(This came at a peak for the Friedberg / Seltzer brand of spoof. Subsequently the genre has well and truly died I think. Fifty Shades of Black was the last real example and it made so little money I don’t think the Wayans brothers are going to do anymore. It really depends on how you define things like Popstar: Never Stop Never Stopping. Then again, that didn’t make much money either. Given the success of the Wet Hot American Summer television series, I wonder if we’ll see a few more TV examples in the coming years.)

Rotten Tomatoes – 2% (1/48): A tired, unfunny, offensive waste of time, Meet the Spartans scrapes the bottom of the cinematic barrel.

(Amazing. That one good review basically says “don’t expect much and this isn’t literally the worst thing you’ve ever seen” .. Reviewer Highlight: What’s the point of making a parody that’s dumber than the stuff it parodies? – Gene Seymour, Newsday) 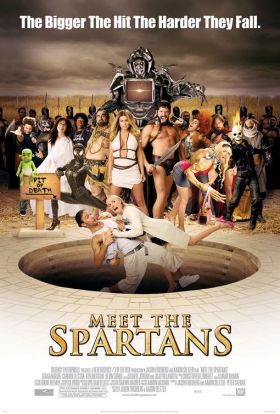 (Designed like a heat seeking missile aimed at me not wanting to watch this movie. Nope. Pass.)

Tagline(s) – The Bigger the Hit, The Harder They Fall (C+)

(Oh geez. This is on the level of “From the producers of..” type self-referential taglines that I don’t like. Doesn’t tell me much about the film other than that it is a spoof… which everyone knows. Though it is at least a little clever, so climbs out of the basement.)

(Sigh nothing will ever beat it. It will be stuck on the Mapstreet’s Map Alright! Sklogpacking Across Europe forever and ever. Good news is Alexander will be amazing to watch I think.)

Notes – Not screened for critics. (duh)

The entire movie was shot in a week. (WHAT)

The film led Sean McGuire to be cast as the title character of the short-lived fantasy comedy series “Krod Mandoon and the Flaming Sword of Fire”, which was discontinued after 1 season due to it’s mixed reviews.

The narrator introduces Xerxes as looking like the fat guy from Borat, he’s played by Ken Davitian who played the fat guy in Borat.

To date (2011), one of two movies written and directed by both Jason Friedberg and Aaron Seltzer, not to have the word “movie” in the title. The other is Vampires Suck (2010).

Nominee for the Razzie Award for Worst Picture

Nominee for the Razzie Award for Worst Prequel, Remake, Rip-Off or Sequel