A small note prior to this post: Once again we take a look back at the movies that we watched over five years ago and choose a Hall of Fame class, five movies that we thought embodied BMT in some way. Perhaps they were particularly bad, or an example of a specific bad movie trope, whatever, something made them stand out as special in our minds. Since we didn’t do email previews back in 2011/2012 we also decided to provide a preview for the movie as well. This is the first in a series of five leading up to our yearly awards the Smaddies Baddies. A recap (Hall of Fame speech really) will follow immediate afterwards to explain why the movie was chosen, things we loved about the movie, and things we discovered upon second viewing. Enjoy!

(Wow that started low. The way this is fading makes me wonder how much actual legs this has in the end, but there is a reason this is one of the worst reviewed films on IMDb. Other than that not much else to say, classic legendary bad movie.)

Leonard Maltin – BOMB –  Reluctant warrior Statham joins forces with a brave king (Reynolds) to battle a treacherous usurper (Lillard) and a wicked wizard (Liotta). Another video-game-inspired fiasco from the unfortunately prolific Boll. Even with a bigger budget and better actors than usual, this is a plodding patchwork of haphazardly edited action sequences. Alternate version runs 162 min.

(I will likely try and watch the (gulp) three hour cut. Jamie owns it, although on Blu-Ray I think. Regardless that cut it likely happening and I will not enjoy. Deep burn on Uwe, but that is expected since Uwe is a terrible filmmaker who has been openly ridiculed by critics for years.)

Jason Rappaport and Dan Stroncak (story) – (BMT: In the Name of the King: A Dungeon Siege Tale; Notes: I don’t think these guys are necessarily writing partners, but there is no info on them. I think they probably work for Uwe Boll’s production company? Would make sense to have Taylor write the script, and then have some of your own guys help with whatever Uwe wants in there.)

Chris Taylor (video game “Dungeon Siege”) – (BMT: In the Name of the King: A Dungeon Siege Tale; Notes: Just the video game guy. Was named the 30th most influential developer of all time in 2002. Left his company in 2016 to work on indie games)

Ron Perlman – (Known For: Fantastic Beasts and Where to Find Them; Pacific Rim; Drive; Hellboy; The Bleeder; Tangled; Alien Resurrection; Blade II; Hellboy II: The Golden Army; Percy Jackson: Sea of Monsters; Enemy at the Gates; The Book of Life; The Spiderwick Chronicles; The Name of the Rose; Looney Tunes: Back in Action; Titan A.E.; The City of Lost Children; Kid Cannabis; Poker Night; La guerre du feu; Future BMT: Police Academy: Mission to Moscow; The Island of Dr. Moreau; Conan the Barbarian; Mutant Chronicles; Sleepwalkers; Bad Ass; Down; The Ice Pirates; Stonewall; Skin Trade; Outlander; Bunraku; Star Trek: Nemesis; Crave; Romeo Is Bleeding; BMT: In the Name of the King: A Dungeon Siege Tale; Season of the Witch; Notes: We should watch Ice Pirates. Ron Perlman is probably most well known now for either Sons of Anarchy or Hellboy, but he’s been in a bunch of stuff obviously. Was in Del Toro’s debut Chronos in 1993 which lead to a life-long friendship.)

Ray Liotta – (Known For: Goodfellas; The Place Beyond the Pines; Blow; Sin City: A Dame to Kill For; Identity; Killing Them Softly; Bee Movie; Date Night; The Iceman; Field of Dreams; Cop Land; Kill the Messenger; Heartbreakers; Youth in Revolt; Muppets Most Wanted; Narc; Something Wild; Unlawful Entry; Battle in Seattle; Observe and Report; Future BMT: Turbulence; The Son of No One; Operation Dumbo Drop; Crazy on the Outside; Revenge of the Green Dragons; The Identical; Forever Mine; Even Money; Powder Blue; Revolver; Better Living Through Chemistry; The Lonely Lady; The Death and Life of Charlie St. Cloud; Unforgettable; Slow Burn; Smokin’ Aces; Corrina, Corrina; Hannibal; Crossing Over; Pilgrim; BMT: In the Name of the King: A Dungeon Siege Tale; Wild Hogs; Notes: He is most well known for looking like he is wearing a Halloween mask of himself. Joking, but this is the first movie I watched where I was like Liotta looks a little odd these days. Hugely famous, mainly for Goodfellas, he still gets decent enough jobs. Definitely an interesting career.)

(So, Uwe Boll had a decent racket going for a while. The way it works is detailed here, but here’s the short version: if you are a German citizen looking for a tax shelter you can set up a shell company, “finance a film” for millions of euros (immediately tax deductible), and then lease back the rights to a Hollywood studio for almost the entire amount saving millions in taxes. The key is having a German director to direct … wait a minute I know a German director by the name of Uwe! I think they closed that loophole, it is the only explanation as to why Uwe isn’t still churning out trash. This is also the definition of “sweet IP”: video games no one else wanted to make into movies … so sell it to Uwe.)

#106 for the Fantasy – Live Action genre

(A genre of the 2000s. Just about at the nadir of the genre though. Below Troll from 1986, and paired up with Seeker the Dark of Rising (twin film) for bringing down the gross for a time. Has held mostly steady since, but the new Harry Potters could help it along the way.)

#32 for the Sword and Sorcery genre

(Literally the lowest grossing example released to more than 4 theaters! There isn’t much to the graphic except that it is small and kind of consistently made over the years. Hopefully the disaster that was Warcraft doesn’t handicap the genre too much going forward.)

#34 for the Video Game Adaptation genre 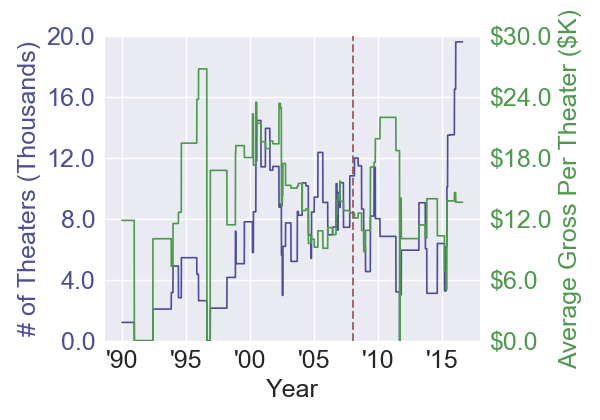 (This guy basically sits … well around other Uwe films. Not that many video game adaptation are super successful. They are coming hot and quick now though, so we’ll see if they can cross that $100 million threshold consistently.)

Rotten Tomatoes – 4% (2/50): Featuring mostly wooden performances, laughable dialogue, and shoddy production values, In the Name of the King fulfills all expectations of an Uwe Boll film.

(Sick burns … although true. The film looks like a few episodes of The Mighty Morphin Power Rangers strung together. Considering it is through and through a German production … that might actually not be a bad analogy.)

Poster – In the Name of the Sklog: A Dungeon Sklog Tale (C+)

(I like the color, but not much else. I can kind of give it credit for being in that high-fantasy mold. It is shockingly similar to some of the artwork for Lord of the Rings. But too much going on and not enough done with the font. I’m giving it a C+ for at least being derivative of something good, but most of the deduction is for being cheap looking to boot.)

(I’ll give it credit for being short and sweet and fantasy-epic-esque. Doesn’t tell you anything, and is boring though, so I mark most of the credit off. Sorry Uwe.)

(We will never watch Piranha 3DD, but Priest is going to happen. Farmer is prooooobably pushing it, although The Seeker and Seventh Son did genuinely have farmers in it … and the main character of this is literally “Farmer”.)

Notes – Kevin Smith and Juliette Lewis were filming Catch and Release (2006) on an adjoining set, and came to visit this set. Burt Reynolds saw them steal two boxes of Krispy Kreme donuts. (I believe it, but Burt Reynolds throughout these notes sounds ridiculous).

Script development took over a year. In the end, Doug Taylor re-wrote eighty percent of the script, because the original story was considered too reminiscent of the “Lord of the Rings” trilogy. (Amazing, what could the storyline have even been?)

Production of the computer graphics imagery in the movie was convoluted and problematic. Uwe Boll claims he had to fire several different CGI providers, who outsourced their jobs to lower-quality providers, who worked for less money. (Yup, this is why graphics in movies causes so much trouble, bullshit like this)

The “medicine” Merick gives Farmer was actually tea mixed with ketchup. Uwe Boll purposely concocted the mixture to get a disgusted reaction from Jason Statham.

During production, Uwe Boll sponsored a charity visit to the set. Guests got to see behind-the-scenes work, and proceeds were donated to a children’s hospital. Reportedly, Ray Liotta was extremely upset by it. In future interviews, he talked about how “crazy” Boll was for allowing so many spectators onto the set.

Jason Statham filmed many of his action scenes while nursing an injured tendon in his foot. He is noticeably impaired while running.

John Gajdecki had trouble filming many visual effects shots, especially scenes with outdoor “greenscreens”. Jan Kruse left the project, due to conflict with Gajdecki, who was eventually fired, and replaced by Doug Oddy. (These notes are ridiculous)

Some of the Krug costumes cost over ten thousand dollars each to produce. (Not a great idea)

Uwe Boll considered releasing the original cut of the film in two installments because of its length. Instead, it was edited into a theatrical release, and the Director’s Cut was released on DVD. (Smart …)

While filming an outdoor fight scene, Burt Reynolds grew overheated in his armored costume, became unconscious, and fell from the platform, on which the duel was being filmed. Reynolds claims this was the only time in his career that he had to miss a day of filming, due to sickness or injury.

Kevin Costner was offered the lead role. Uwe Boll claims Costner wasn’t interested in filming a large-scale action film, and instead offered Boll the opportunity to direct the project he was working on at the time, Mr. Brooks (2007). Boll turned it down. (WHAT, why would anyone offer Boll to director anyone?)

Claire Forlani was the last major performer to be cast. Her role had been previously offered to Jessica Alba and Jessica Biel. (Who probably just laughed into the phone for half a minute)

Though Siu-Tung Ching was the action Director, Uwe Boll personally choreographed the scene featuring Jason Statham and Ron Perlman fighting the Krug in the barn. (The one where it literally looks like Puttys from Power Rangers I think)

A day of filming was lost due to heavy fog. Some of the forest terrain and mountaintops could only be accessed via helicopter, and on a particular foggy day, Uwe Boll and part of his crew were literally stranded on a mountain for over two hours, because the helicopter wouldn’t take off.

Burt Reynolds extensively re-wrote and edited the dialogue for his death scene, creating friction with Script Supervisor Ingrid Kenning. Reynolds had never played a character who died in a film, and was adamant that the scene be something special.

Nominated for the Razzie Award for Worst Screenplay (Doug Taylor)